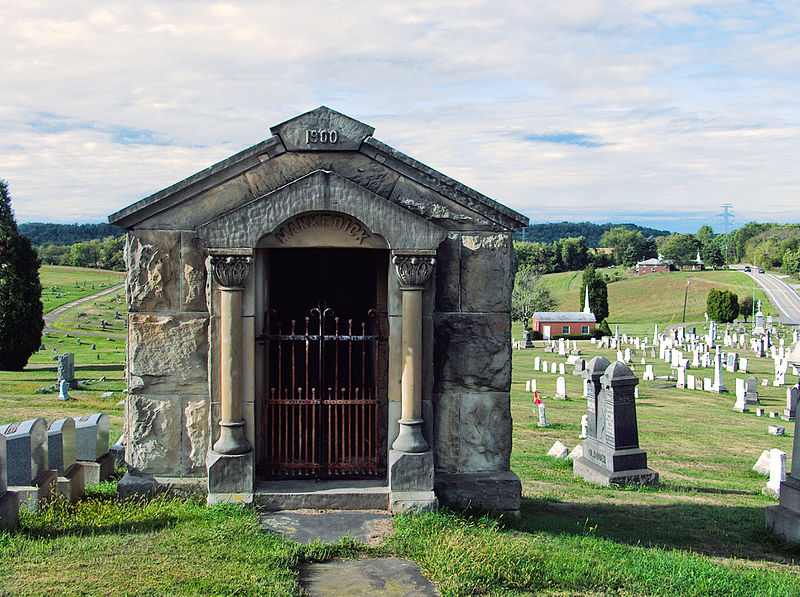 A simple rustic mausoleum from 1900, enlivened by medieval columns with finely carved capitals.

Instantly recognizable as the work of the Master of the Curly G, these two stones have inscriptions beginning simply “the grave of”—a curious family tradition also observed by Elisabeth Moss, who was buried in the same plot and is probably related. Note the awkward and rather embarrassing correction of the name “McBur[n]ey” above.

This particular craftsman, active in Robinson Run Cemetery in the 1830s, sticks to one particular symbol, which Father Pitt interprets as a stylized thistle—emblematic of sorrow, but also emblematic of Scotland, perhaps the homeland of most of his patrons. Fan ornaments decorate the corners of all his stones.

Alexander and Isabella McClean’s headstones are good and well-preserved examples of his work. He also gave them footstones, which seem to have migrated a little from their original positions, but are still fairly close to the headstones they go with. The carving on the footstones looks a little hastier, although some of that may just be the smaller size. 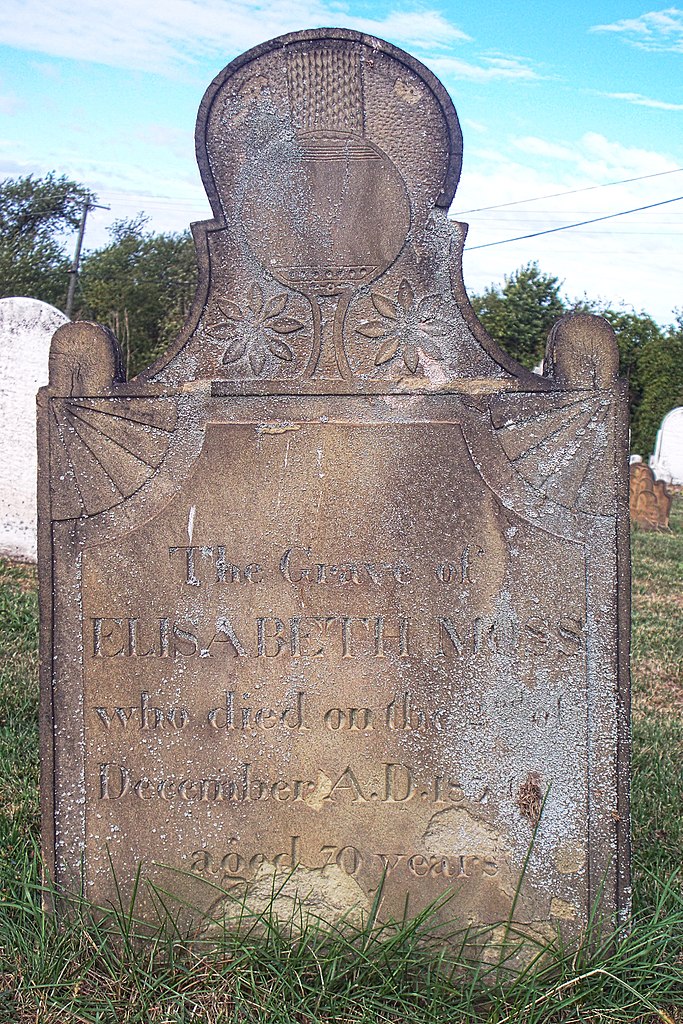 The same artist made this stone for Elisabeth Moss. “The grave of,” incidentally, is a very unusual way to introduce a tombstone inscription around here, but it was obviously a family preference: Elisabeth Moss is buried in the same plot as the McBurneys, who, though their stones were cut by a different craftsman, both have inscriptions that begin with “The grave of…”

These are probably the parents of the Agness Dickson who died in 1799 and is buried next to them. Their stone was cut by the same craftsman who cut Agness’ stone, whom we call the Master of the Curly G. Here, however, he has done much more elaborate work, which may be explained by his having had eighteen years of experience since Agness’ stone. The decorations are something new, and the individual letters seem more neatly made.

This tombstone gives us very good evidence of how our early stonecutters did their work. We can still see the lines scratched into the stone with a straightedge to align the letters. But it is equally plain that the stonecutter did not first trace the letters with chalk or any other impermanent material: he made his lines, and then he just started writing. If it were not so, he would not have been taken by surprise when he came to the end of a line and had no room for the E in “wife.” He would not have left out the day of the month in Rachel’s inscription, then realized his mistake, shrugged, and stuck it in after “A.D.” And this seems to be the almost universal practice of the stonecutters of two centuries ago: they never drew the inscription first before cutting it, but launched straight into cutting the letters, dealing with errors in any clumsy way that occurred to them.

Now, it is quite possible that Agness’ stone was cut at the same time as this one, rather than when she died in 1799. In favor of that proposition we have these arguments:

There are enough differences between the work on this stone and the work on Agness’, however, including the decorations and (in Father Pitt’s eyes) much neater individual letters, to suggest that the stonecutter might have been considerably older and more experienced when he cut this stone. Old Pa Pitt regards the matter as worthy of further investigation. 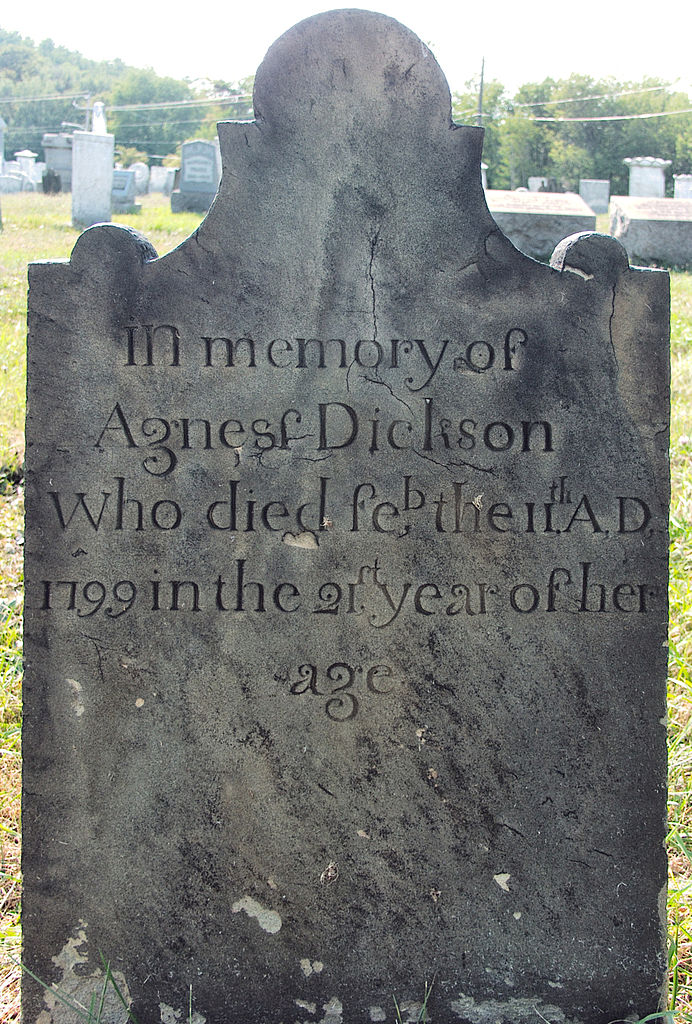 If this stone was cut when Agness Dickson died in 1799, then it is one of the oldest legible grave markers in the Pittsburgh area. Father Pitt is not sure that it was not put up later, however; it could have been cut at the same time as her parents’ stone in 1817.

Robinson Run Cemetery is a fairly large cemetery near McDonald. It includes a fourteen-acre burying ground that obviously goes back to the 1700s, and many interesting tombstones may be seen there.

The work of this stonecutter is distinctly recognizable, and he has left a few other stones in the same graveyard. His most distinctive quirk is his habit of making a lower-case G like a curly number 3. Following our usual custom, therefore, we shall call him the Master of the Curly G.

On this stone he has made use of the long S twice, and in both cases he gets it wrong. He uses it for the second member of the double S in “Agness,” when it should be the first; and he uses it in the ordinal “21st,” but makes it shorter than the T following (it should be longer, since the long S should have the same dimensions as a lower-case F).

Note the spelling “Agness,” by the way, which seems to have been the usual spelling of that name among the early settlers of western Pennsylvania.