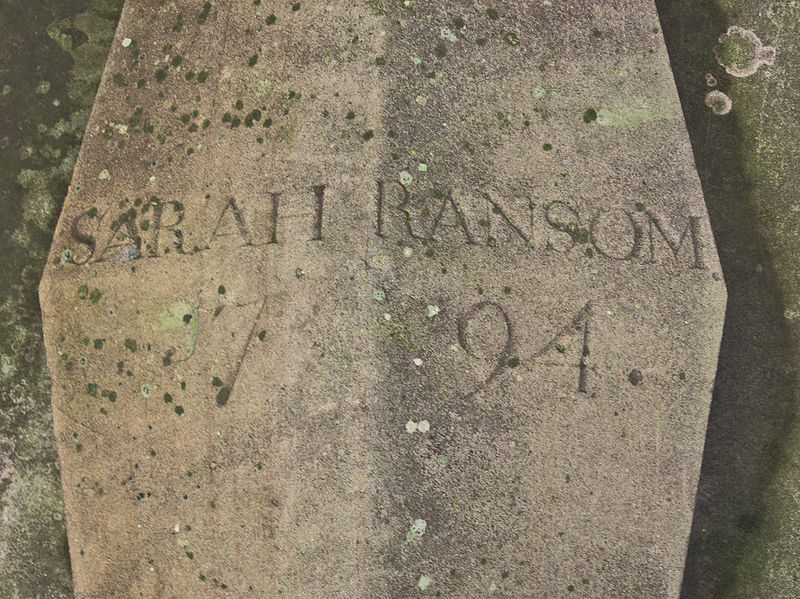 This little stone lay hidden under the ground until 2008, when a landscaper almost literally stumbled on it. It marks the grave of a small child who died in 1794, and that is all we know about her. But the stone and its inscription are very fine for the era, so we suspect her parents had some money. This Post-Gazette article by Ann Rodgers has the story of the stone’s discovery. 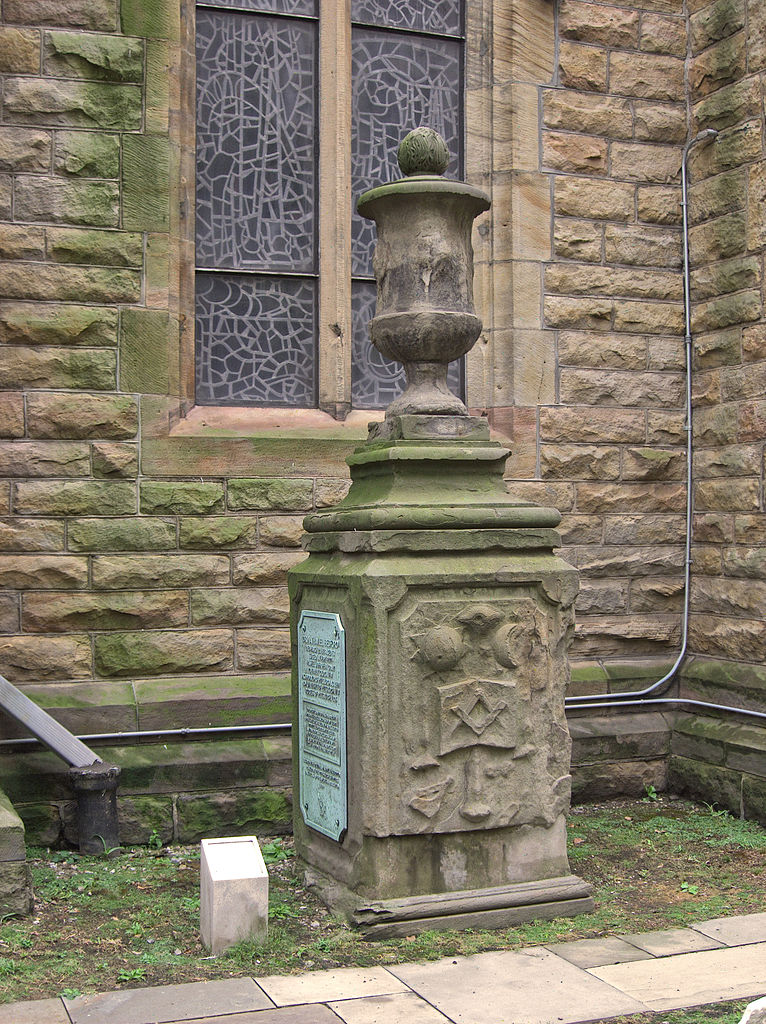 Dr. Nathaniel Bedford was the first physician in Pittsburgh. He came with the British to Fort Pitt and stayed. Here are two paragraphs from the Standard History of Pittsburg, Pennsylvania (1898):

Shortly after I770 Dr. Nathaniel Bedford, surgeon in the British Army, resigned his commission and took up his permanent residence in the town, being attracted by the wonderful beauty of the place before the iron hand of Industry had stripped the verdure from the hills, seamed and scarred the lovely bosom of the earth, deﬁled the sparkling waters and spread a sooty pall across the sky.

Dr. Bedford was a man of polished manners, thoroughly educated in his profession, as his commission in the British Army attested, and of scholarly habits. His success was rapid and complete and he accumulated a modest fortune in the form of several tracts of land on the south side of the Monongahela, now within the city limits. Shortly after the beginning of the present [nineteenth] century he retired from practice. In the city directory of 1815 his name appears as “Nathaniel Bedford, gentleman, Birmingham.” He never married [this is incorrect; see below], and after his death the Freemasons, of which fraternity he was a prominent member, erected a monument to his memory in the form of an iron urn, which still stands, or did until recently, on the hillside immediately under the track of the South Twelfth Street Inclined Railway.

The assertion that Dr. Bedford never married is incorrect, He married very well indeed: his wife was Jane Ormsby, heiress of the Ormsby family, and through her inherited the land that became the town of Birmingham—named for Birmingham in England, near which Dr. Bedford was born. In other words, Dr. Bedford owned the South Side, or at least the part of it out to 17th Street, where an awkward kink in the street grid and the sudden broadening of Carson Street mark the beginning of the former separate borough of East Birmingham. Dr. Bedford and his wife had no children, however, and it was his Masonic lodge that erected this memorial when Dr. Bedford died in 1818. He was probably buried under it, in a spot that would have been verdant and semi-rural in 1818, but rapidly developed into one of the most crowded neighborhoods in the city of Pittsburgh. The monument stood neglected under the Knoxville (or South Twelfth Street) Incline until 1901, when the Pennsylvania Railroad needed the land. Then the dilapidated monument was moved here to Trinity Churchyard, probably with the remains of Dr. Bedford (sources seem to differ on whether his remains were discovered). 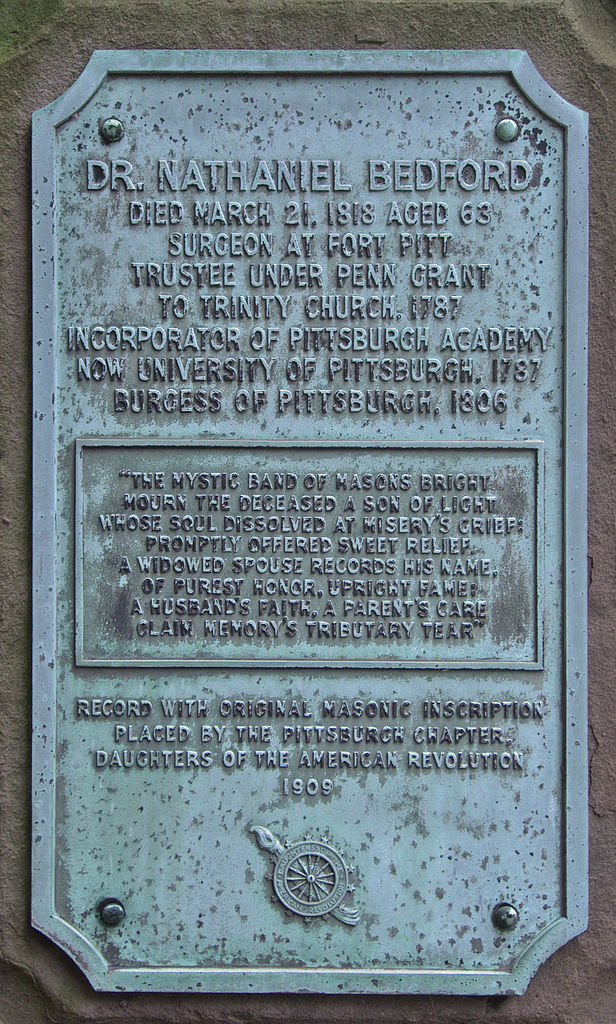 The Daughters of the American Revolution added this plaque in 1909. It reproduces the poem originally inscribed on the monument.

These Masonic symbols in relief have eroded considerably, but are still recognizable.

More about Dr. Nathaniel Bedford, including a biography in PDF format, can be found here.

A tombstone for a young mother and her child. Elizabeth died at two months in 1839. Two months later her mother died as well. Did she die of the same disease? Cholera was very popular in Pittsburgh in the 1830s, but there seems to have been a lull in the epidemics in 1839. Perhaps Nancy died of grief, as mothers often did in those days. (Today we would look for another diagnosis, but modern medical science agrees that psychological factors play a large role in the body’s ability to overcome serious ailments.) Grief also reached epidemic proportions in the nineteenth century, when childhood mortality was, by our standards, appalling.

Pittsburgh’s earliest settlers are buried downtown in the churchyard of Trinity Cathedral, the Episcopal cathedral of Pittsburgh (or at least the cathedral of some Anglican diocese, though which one may be up in the air right now). Next door is First Presbyterian, another colonial-era congregation, and across the street is the Duquesne Club, forming a perfect triangle of old money.

Trinity Churchyard is half a block up Sixth Avenue from the Wood Street subway station.